The Fourth Annual General Meeting of FDPPI was held on 24th September 2022 at The Chancery, 10/6, Lavelle Rod, Bangalore to approve the annual accounts and to discuss other issues.

After welcome by Mr Nagendra Javagal, Naavi presented the accounts and Ramesh Venkataraman presented a review of the activities of the year 2021-22.

A discussion on the road ahead ensued and there were many suggestions that were discussed during the meeting on how FDPPI should proceed in the coming year.

We thank all the participants who attended on site and on the zoom.

IDPS 2022 should be a community event

FDPPI is an organization of the data protection professionals and by the data protection professionals. The organization is supported by the aggregation of activities of its members.  For practical reasons some members are designated as “Supporting Members” so that they act as divisions of FDPPI for generation of revenue through their activities. But all other members are like flesh and blood of the organization. If they are active, FDPPI is active.

During this time and day, the event would be live. During these 18 hours we can accommodate perhaps 6-8 keynotes and another 6-8 panel discussions.  This  means that we can listen to around 30 -35 speakers and share their thoughts with the audience.

The canvas of discussion is “Privacy and Data Protection” and the theme is “Shape of Things to Come”. We therefore need to discuss the current laws in India and elsewhere, the technology of protecting Privacy and data, the Governance of Data for protection and monetization and many other related issues.

We are fully aware that the number of available speakers and the amount of knowledge they can contribute are much more than what we can present in 3 days. We cannot accommodate them all despite our best intentions.

We are also aware that this is a dilemma that is faced by every organizer of such programs world over. There are too many deserving speakers who ought to be heard. But either the organizers cannot reach out to them or the speakers are not available at the required time and place for the event. This often results in losing an opportunity to hear the experts and some times disappointing speakers who are eager to share their knowledge.

We therefore invite data protection professionals who would like to contribute their thoughts to the “Shape of things to come” in the domain of Privacy and Data Protection in the IDPS 2022 to send us recorded video clips preferably of less than 5 minutes. These recorded videos would be broadcast on the IDPS 2022 platform during the time 6.00 am (IST) to 12.00 noon (IST). This will ensure that the content would be available for the US-Australia time zone as an extension of the live sessions which are more suitable for the India-Gulf-EU time zones.

The video may be kindly recorded if possible with the background setting of the image provided above. Naavi would be available for checking the topic of discussion as well as for a participative recording of the views as a conversation if it is preferred.

The end objective of this exercise is to ensure that IDPS 2022 becomes an event of the community of data protection professionals.

We hope that we will also be able to show case the professionals who would otherwise miss participation in the event. For the upcoming speakers this is an opportunity to be present on this platform.

I request all professionals to make this concept a success.

FDPPI is conducting IDPS 2022 which is a flagship event of FDPPI and an apex national event. During the three day virtual event that is taking place this year between November 11-13, about 30-40 speakers would be taking part.

We are aware that there are many more experts in the domain not all of whom can be identified by us and invited for the program. In fact FDPPI has over 200 members each of whom are decorated professionals and could contribute to the society with their knowledge. But we cannot accommodate all of them as speakers in this prestigious event.

However, we now have an alternative. We would like to collect both text and video messages from experts around the world and publish it as pre-recorded videos or messages during the IDPS 2022.

We therefore invite experts to contribute text or video messages by email  if they have a view on Privacy and Data Protection or related areas.

Such views can be on IDPS 2022, FDPPI, some issue on Privacy, any of the data protection laws such as GDPR, CCPA, ITA 2000 , PDPB 2019 or the proposed law or any other matter of relevance to the professionals working in the domain of Privacy and Data Protection.

In case the views are not to be published and are meant only for FDPPI as a confidential view point, we would respect such request and not publish them.

In case you are sending any videos, kindly make it short and not exceeding 5 minutes. If you want to contribute pre-recorded content as a “Speaker” in the IDPS 2022, you can send a request and contribute videos of longer duration not exceeding 20 minutes.

IDPS 2022 is the flagship program of FDPPI and will focus on Privacy and Data Protection in India. This is the third year of the program and will be  conducted as a virtual conference on November 11, 12 and 13, 2022.

Details of the program will be available exclusively on www.idps2022.in

There are many sponsorship opportunities available during the conference for interested persons.

Those who are interested, may look through this flyer.

IDPS 2022 to provide Awards during the conference

One of the features of this year’s IDPS  would be the awards  to be provided to different category of persons recognizing their contribution to the Privacy and Data Protection eco system in India.

(Download the flyer with all information on the awards)

The program will be conducted between 2.00 pm IST to 8.00 pm IST for the convenience of the global audience.

In the event the Government of India comes up with a new version of Data Protection Bill for public comments, IDPS 2022 may be conducted over three days and will conduct a special discussion on the draft law for one full day.

In such an event the program would be conducted on November 11,12 and 13. 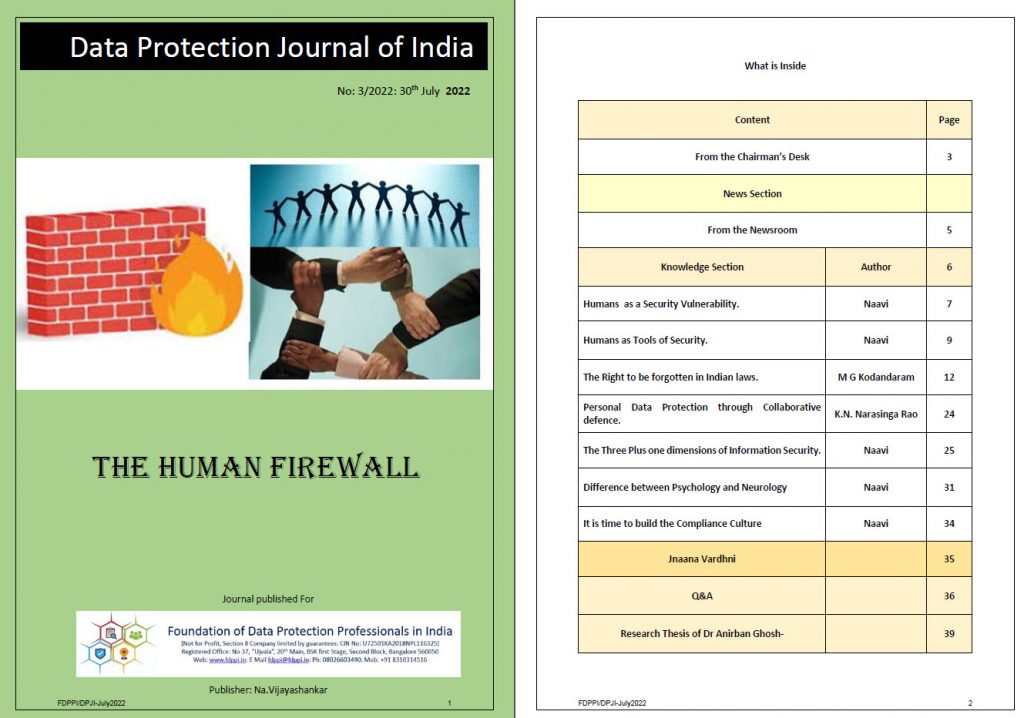 DPJI is presently a journal published on internet and its issues are available at www.dpji.in. The current issue is the 7th issue in the series. The earlier issues covered different aspects of Data Protection

In the past issues several interesting topics such as the Valuation of Data, the PDPSI framework (Now renamed as DPCSI framework), the need for compliance culture to be developed in India have been discussed.

In the current issue an important aspect of Data Protection namely the role of people have been discussed.

By focussing on the concept of “Human Firewall” a focus has been brought to the use of humans to develop a security cover to combat the risk of privacy and information security. Just as technology tools such as encryption, firewall and Intrusion detection systems are used to combat technology risks, this concept envisages that human skills have to be used for risk mitigation.

The involvement of humans as part of the security posture is important both because insider frauds constitute a large percentage of cyber risks and cannot be mitigated by policies, procedure and technology. Also even the technology or policy controls have to be implemented by the humans only and motivating them to be “Security Champions” is necessary.

This concept has been well ingrained in our earlier discussions on “Vulnerabilities in human space” and “Theory of Information Security Motivation” etc.

We had also incorporated several principles of using human resources in the unique indigenous framework for Privacy and Data Protection, namely the DPCSI (Data Protection Standard of India). In particular, we had introduced a standard titled 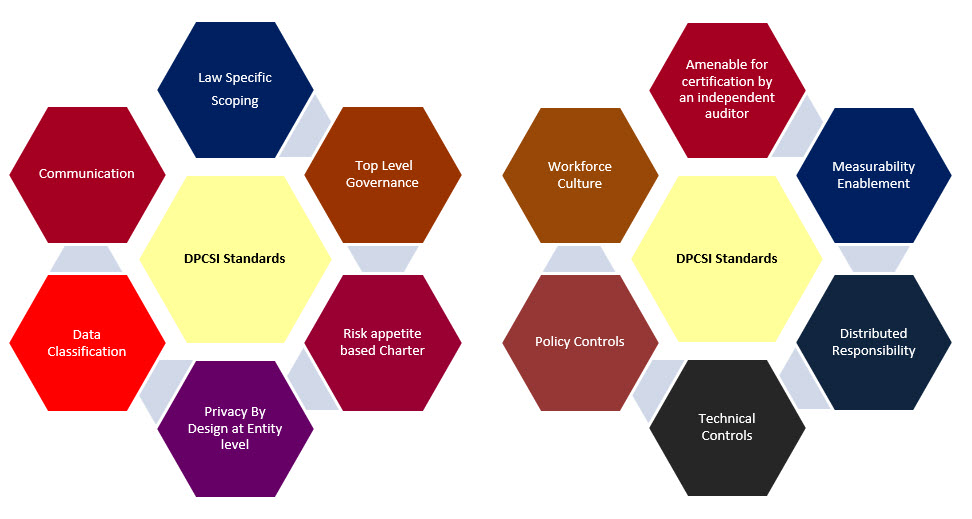 “Distributed Responsibility, along with implementations for Augmented HR policy which included incentivisation and dis incentivisation for motivational purpose. Further the “Augmented Whistle-blower policy” extended the concept to a “Human IDS system”.

Naavi.org has also been discussing from time to time, concepts such as the “Human Bomb”, “Deviant Minds in Workforce”, “Technology Intoxication” etc all revolving around the concept of “Mitigating human Risks” in Cyber Crime prevention.

It was therefore a pleasure to observe that Dr Anirban Ghosh, a professional working in BT group had actually worked on a research thesis on the topic of “Human Firewall” and with his permission the entire thesis has been reproduced in the July issue of the  journal.

We hope that professionals interested in the field of Cyber Psychology, Human Resource Management  and related topics would find the issue worth going through.

Kindly do share the copy within your organization as a part of your knowledge management.

Any queries on any of the topics are welcome.

It is time to build a Compliance Culture

In both these phases, we focussed on the people in the organization and tried to educate them on security issues and privacy issues.

While the efforts for building an information security culture and privacy culture continue, they are now being subsumed by the new requirement of building a “Compliance Culture” in organizations.

This requirement is  typical of the Indian market where we always stretch the compliance requirement till we are forced to comply.

The time has therefore come now to build a “Compliance Culture” in an organization. In this context, an “Organization” is the aggregation of the senior executives who have gone through the implementation of measures in their respective work places to ensure that their subordinates are impregnated with the importance of information security and privacy and why they all need to change their attitudes to work and attitudinally re-orient themselves to practice better security and privacy ethics and technology in their day to day work.

FDPPI is now embarking on leading Indian organizations into this phase through its program.. “Data Trust Score, the future of Privacy Protection”.

“Data Trust Score” or DTS, is the suggested measure of “Maturity of Data Protection Law Compliance” in India. It is a suggested deliverable of a data auditor who audits the data protection practices of a company in India. It works like the “Credit Rating” assigned for financial instruments by Credit rating agencies such as CRISIL or ICRA.

FDPPI which has created an eco-system for certified Data protection audits based on the indigenously developed framework of DPCSI (Data Protection Compliance Standard of India) is adopting the DTS-DPCSI, as  model for calculation of DTS on the DPCSI framework.

DTS-DPCSI is the first of its kind concept and would be the forerunner of similar assessment yardsticks that will emerge in future for other frameworks also.

The life of a Data Protection Professional will not be complete without understanding the concept of DTS and how it can be applied in their work environment.

Let us start our journey in understanding the concept of DTS through a virtual presentation to be made by Naavi on 10th July 2022 at 11.00 am.

FDPPI would like to form a group of professionals interested in NeuroTech and Neuro Rights to take the study further.

This will be  an exploratory group to identify the requirements of developing Neuro Rights legislation in India and application of Privacy laws in the Neuro tech context.